skip to main | skip to sidebar

Currently in its 12th year, the Subaru/Leave No Trace Traveling Trainers, 2 teams of professional outdoor educators, have reached over 10 million people in 48 states with Leave No Trace education and training.

Picture of the Week: Chipmunks Unite for Leave No Trace 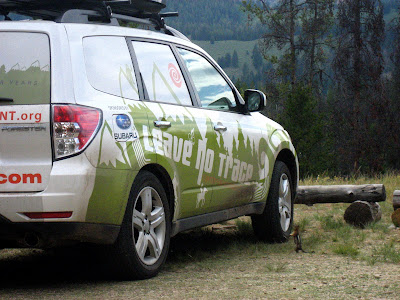 We caught this little guy checking out the graphics on the Subaru after our presentation at Camp Perkins near Stanley, Idaho.
Share |
Posted by Emily and JD at 9:07 AM 0 comments

We spent the better part of last week in Salt Lake City, Utah for Outdoor Retailer Summer Market 2009. With over 20,000 people in attendance, the bi-annual event is considered to be the largest outdoor sports industry gathering in the world.

Thanks to the help of Subaru of America and Backpacker Magazine, we were able to host the Great Gear Giveaway again this summer! We gave away a total of 18 fabulous prize packages of gear, donated by dozens of our friends in the outdoor industry. It's pretty exciting, but the best part is that through the Great Gear Giveaway we were able to sign hundreds of people up for the Bigfoot Challenge.

We want to give a big thanks to everyone who took the Bigfoot Challenge at OR. We'd also like to thanks all of our incredible partners who find the most creative ways to help us out and highlight our educational efforts during the show!

Last Week in the West

What a week!  Our final days as Team West were spent in Salt Lake City at the Outdoor Retailer Show and capped off in Lyons, CO for Rocky Grass Music Festival.  These two events were a great opportunity to provide outreach and encourage people to take the Bigfoot Challenge!  Over 800 people signed up for the challenge and pledged to do their part to Leave No Trace this summer.  Have you taken the Bigfoot Challenge yet?  If not, here's your chance...just click here!  It's fun.  It's free. It's fast!
After over 25,000 miles of western travel, we are ready to reach outdoor enthusiasts of all kinds east of the Mississippi!  Hope to see you out there...
Safe travels...Kate and Tracy
Share |
Posted by Leave No Trace at 2:10 PM 0 comments 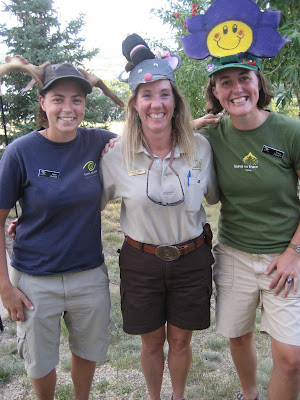 We spent the weekend at Jordanelle State Park in Utah.  On Saturday, we joined park naturalist, Kathy Donnell, for a walk about at Hailstone Campground.  On our walk we spoke to over 130 campers about the importance of practicing Leave No Trace while enjoying the splendors at Jordanelle.  The park is home to Jordanelle Reservoir, which is a future water supply for Utah.  In addition to industrial, municipal, and irrigation water, the reservoir provides critical wildlife habitat and recreation opportunities.  It is the largest man-made impoundment within the Bonneville unit of the Central Utah Project- the largest water development project in Utah history.  If you get a chance to visit the park, be sure to check out Rockcliff, which is at the east end of the park.  Rockcliff has walk-in tent sites, a boat ramp, river and reservoir access, and a beautiful nature center, where you can touch a grizzly bear (if you dare!).  It is considered a hidden gem of the park, as many park visitors do not know about it!  We want to thank Kathy for a wonderful weekend of fun, exploration, and outreach.  We are off to Salt Lake City for the Outdoor Retailer Show...
Safe travels...Kate and Tracy
Share |
Posted by Kate and Tracy at 8:33 AM 0 comments 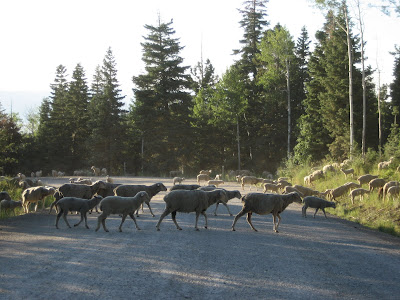 Feeling a bit sheepish as we traveled through Utah- BAAAAA!
Share |
Posted by Kate and Tracy at 11:13 AM 1 comments

Bigfoot on the Iron Goat Trail? 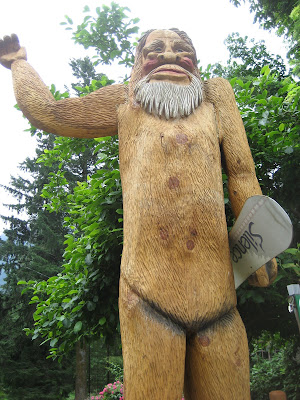 Last night, Team West spent a lovely evening with folks that were part of a volunteer vacation for the American Hiking Society.  This year marked the thirteenth consecutive year of this event taking place on the Iron Goat Trail, approximately 80 miles outside of Seattle.  During the awareness workshop, one of our favorite PEAK games-How Long Does It Last?, was the avenue for a lively discussion on the importance of disposing of waste properly and recycling.  We applaud the trail crew that is taking time out of their busy schedules to volunteer to help keep the Iron Goat Trail of the Cascades as beautiful as ever!
On the ride up to our workshop, we were shocked to run into a friend.  We were awestruck as we cruised down Stevens Pass Highway and out of nowhere, there he was.  It was Bigfoot himself!  He was just finishing up a day on the slopes and let us know that he was getting excited for the upcoming Outdoor Retailer show in Salt Lake City.  He hadn't begun packing yet, but he assured us that he would be there.  He even offered to help us give gear away at the Leave No Trace booth.  The big guy is so thoughtful.  He is looking forward to the event, but if you are not planning on attending OR, he wanted us to remind everyone to take his challenge.  It takes less than 2 minutes and you could win some sweet gear from our partners. Sound good? CLICK HERE to participate.
Safe Travels...Kate and Tracy
Share |
Posted by Kate and Tracy at 11:11 AM 0 comments

Two of a Kind

This week we wrapped up our tour of the east coast with a few summer camp events. First we headed to Massachusetts to work with the Metropolis of Boston Camp. We spoke with campers about the importance of Leave No Trace and encouraged a little friendly competition with one of our favorite activities from the PEAK Pack, Step On It-the Feud. Campers put their Leave No Trace prowess to the test as we quizzed them on the topics of litter, wildlife, and durable surfaces! 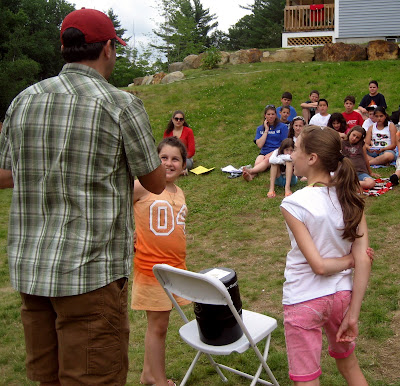 Next, we drove south to meet up with campers at Black Bear Lake Day Camp in New Jersey. We presented seven 45-minute workshops and were able to cover a wide range of Leave No Trace topics. Our favorite part of the day was a discussion we had with campers about wildlife. During the activity (which you can find in 101 Ways to Teach Leave No Trace) campers had the chance to play the role of local wildlife (black bears, snakes, squirrels and deer), which led to a great conversation about the effect that human behavior can have on wildlife. 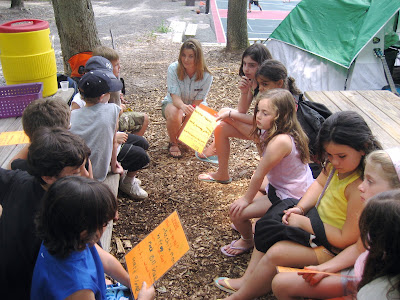 All combined, we spoke with over 200 campers! Not a bad way to end an incredible journey through New England.
Share |
Posted by Emily and JD at 7:09 PM 0 comments

Picture of the Week: Bring on the Flap-jacks! 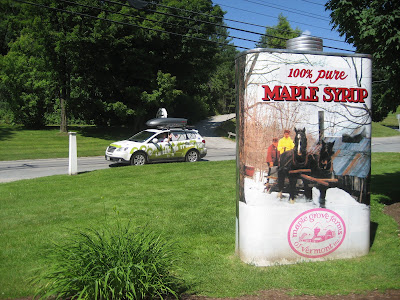 We had the day off and decided to have a little fun...Vermont style!
Share |
Posted by Emily and JD at 1:47 PM 1 comments

2009 marks the 10th anniversary of the Subaru/Leave No Trace Traveling Trainer Program. For the past 10 years our teams have been living on the road out of a Subaru working with millions of outdoor enthusiasts and professionals throughout the country. Chances are that we have even worked with you once or twice. We recently developed a Traveling Trainer survey to ask you about how we can continue to strengthen our program and encourage you to continue your support of Leave No Trace.

If you had any interaction with the Subaru/Leave No Trace Traveling Trainers over the past 10 years we are asking you to take just 10 minutes to fill out this survey. Click here to begin the survey. Thank you for taking the time to help us improve and build for the future. We sincerely appreciate all that you do for Leave No Trace!

Celebrating 10 Years of Education in Motion.
Share |
Posted by Leave No Trace at 2:26 PM 0 comments

Ever wonder who created the first down jacket in the USA? 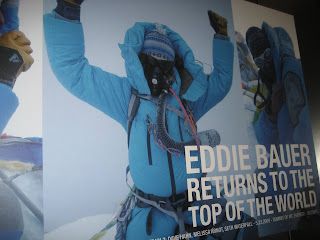 We had the pleasure of working with one of Leave No Trace's newest corporate partners, Eddie Bauer.  Established in 1920, Eddie Bauer offers premium-quality clothing, accessories and gear for men and women that complement today's modern outdoor lifestyle.  During our visit to the Seattle Headquarters, we spoke to employees about Leave No Trace as an organization, as well as the programs we offer.  We introduced the employees to the 7 principles and taught them ways to incorporate the principles into their personal outdoor adventures, as well as the "Get Outside" initiative offered to them as employees of Eddie Bauer.  Did you know that Eddie Bauer was actually a person and he patented the first quilted goose down jacket in North America in 1940?  He was an avid outdoorsman who's spirit and legacy lives on at Eddie Bauer.  We are so happy to have Eddie Bauer join the Leave No Trace community and we look forward to working with them again in the future!
Safe travels...Kate and Tracy
Share |
Posted by Kate and Tracy at 4:13 PM 0 comments

4th of July on the Saco River

To celebrate the 4th of July we headed to Fryeberg, Maine to work with the Saco River Recreational Council. The Saco River is an incredibly popular recreational river-during the summer it's not uncommon to see over 3,000 people on the water durning a busy weekend. With so many users, it is not surprising that the Saco also sees it's fair share of impacts. Litter, illegal fires, and user conflicts are all major concerns on the Saco. To combat these impacts, the Saco River Recreational Council host several massive river clean-ups each year and is also working on educating users about Leave No Trace.

We had a great time despite thunderstorms and dangerous river levels. While the weather kept away many of the boaters that usually flock to this river over the summer, we did have a chance to meet with many individuals who are dedicated to preserving the Saco River for generations to come. We want to give a big thanks to Michelle and the rest of the staff at Swan Falls Campground for being such great hosts. Keep up the good work and we hope to see you again soon!
Share |
Posted by Emily and JD at 2:14 PM 1 comments 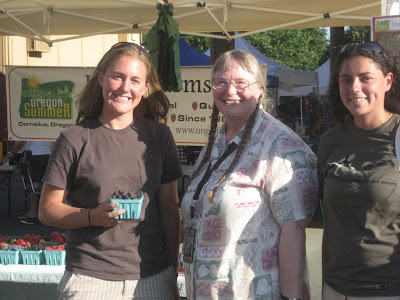 The berry essence of Oregon- Team West meets with Oregon State Advocate, Georgia Bosse, at the local farmers market.
Share |
Posted by Kate and Tracy at 10:44 AM 1 comments

Whidbey Island is a beautiful area in off the coast of Washington.  With dense forests, vast beaches, and plenty of recreational opportunities, the island was a perfect location for a trainer course.  The weather more than cooperated as we explored Leave No Trace both at the campground at Whidbey Island Naval Air Station and at Deception Pass State Park.
All seven participants on the course were excited to learn ways to incorporate Leave No Trace into their lives, whether it be working with boy scouts, leading mountaineering trips, working with the Washington Trails Association, or teaching their family and friends.  Over the two days we all learned and laughed a lot!  Some of us had new experiences- SPAM and eggs or banana boats- but all of us enjoyed our first Swedish candle!  Thanks again to Dave Myers for all his hard work in setting up this weeks events- you are the best Big Bear!
Safe travels...Kate and Tracy
Share |
Posted by Kate and Tracy at 1:29 PM 0 comments

Special Thanks to partners at Subaru of America.